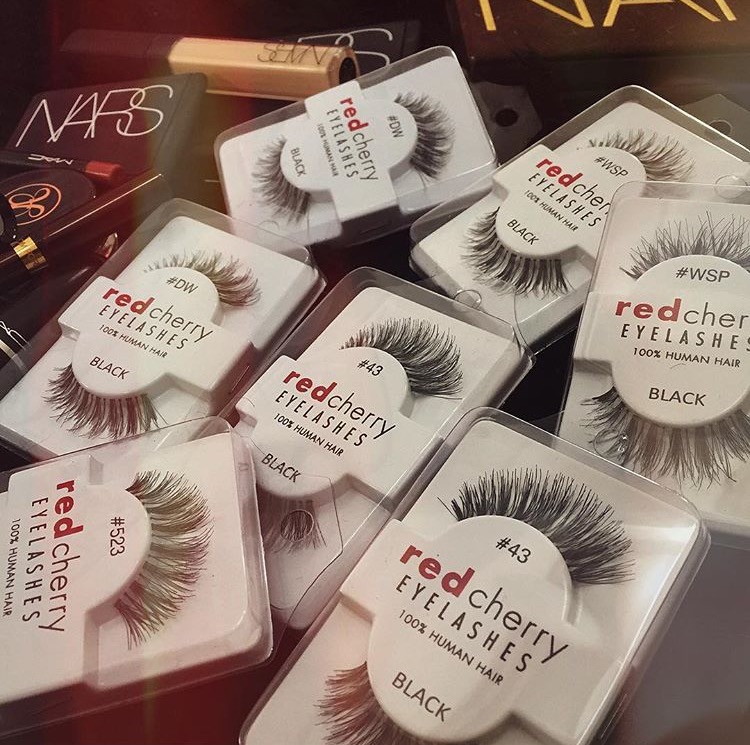 Every makeup artist and their grandmother seem to be plugging Ardell and Huda Beauty lashes recently. And fair enough, they’re probably great: you do you. But when I compared a pair of Ardell Demi-Wispies and a pair of Red Cherry Demi-Wispies, there was absolutely no difference. In fact the Red Cherry lash band seemed to be thinner, even (making them appear more natural when applied). Aaaaaand, each pair of Red Cherrys is only £3.49 (I get mine from FalseEyelashes.com as the shipping is free and usually next day), with some styles being even cheaper than this. Also, up until recently, I never wore false eyelashes, opting for loads of mascara instead (which never produced the desired result but after some reflection on a few photos of me at 15 when I thought huge, thick eyelashes were the bomb, I put myself off lashes for years). However, since I discovered Red Cherry I wear them most days now as I can get around 5 wears out of a pair (with minimal care) before they start looking tatty and I bin them. So here’s a quick guide to the good, the bad and how to avoid your lashes looking spidery and lopsided.

Cons: Doesn’t come with lash glue, each pair comes in a flimsy plastic case (maybe I was spoilt by MAC lash cases), only available online in the UK (not 100% about this being true but it’s what I THINK). Also, due to their popularity they sometimes sell out online 😦 So I recommend when they have a 10/20% sale on buying them in bulk.

Super thick synthetic ‘block’ lashes! Stop wearing these! No one looks good in these! Your eyes will look tiny due to the heavy lashes crowding your eyelids and enclosing them. Opt for feathery, natural looking lashes that have differing thickness (e.g. thicker near the lash line).

Ok so you’ve bought some good lashes and you realise Red Cherry don’t come with lash glue so you’re either using some old Eyelure shit or you’ve invested in a separate lash glue (MAC’s lash glue or Revlon’s Precision Dark are good). Now, always trim the end of the false eyelashes as they always make them bigger than you need, and if you don’t trim them you’ll end up having a non-sticking flappy lash. Nu-uhhhh girl. I also like to trim a bit off the inner corner as well, basically when in doubt: trim more than you think you need rather than less. Once you’ve done all your eye makeup, curled your lashes and put on two coats of mascara and let it dry, take one of the false eyelashes and hold the outer corner with some tweezers. Apply a thin-ish layer of lash glue to the false lash, putting a bit of a thicker amount on the ends (put this lash glue in your handbag: DO NOT LEAVE THE HOUSE WITHOUT LASH GLUE). Then, wait a full 30 seconds for the lash glue to dry a bit. Now, still holding the lash from the outer corner with the tweezers, aim for the middle of your eye and place it on, don’t press it down. Once you’ve got it in place, use your finger to press down the inner corner and use the tweezers to push down the outer corner. Then, if you want to keep them looking natural AND you want to re-use your falsies, do NOT curl them together with your natural lashes. Instead, just push them up a bit with your finger. Then, use a thickening mascara to blend the false lashes with your real lashes, so only apply this at the base of your lashes. If you apply mascara the whole way up the false lashes, they’ll get that spidery, clumpy effect and are harder to clean/re-use.

Speaking of cleaning and re-using…

HOW TO CLEAN AND RE-USE YOUR FALSE LASHES:

It can be very tempting at the end of a night out to just rip your lashes off and bin them. When to bin them: when you find them the next day at the bottom of your clutch sandwiched between your house keys and a McChicken Select. When not to bin them: when they’re still on your eyes but you’re feeling lazy. Take them off and lightly rub them with a makeup wipe. If they still have mascara coming off them, take a cotton bud with liquid eye makeup remover to them (gently!). Then, take a pair of tweezers and carefully pick the lash adhesive away from the lash band. Let them dry then put them back in their lil box for next time. Simple.

HOW TO STACK FALSE LASHES:

This is what gets you that sky-high but still oh-so-natural Ky Jen look. Some people say stick the two pairs of lashes together before applying them but this always makes the lash bands hard to work with and too ‘rigid’ for a natural look. Instead, apply the smaller/more natural set first as close to the lash line as possible, and then the larger set on top of that. It should end up giving you an effect like this:

(This is a pair of Red Cherry Demi Wispies topped with a pair of Wispies).